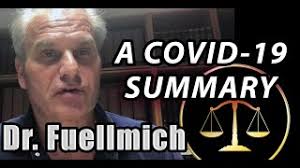 Fuellmich is leading the committee's corona crisis tort case — an international class-action lawsuit that will be filed against those responsible for using fraudulent testing to engineer the appearance of a dangerous pandemic in order to implement economically devastating lockdowns around the world.

He estimates more than 50 other countries will be following suit. In the video above, Patrick Bet-David interviews Fuellmich about how and why the group was formed and the status of this work.

Early on, as Fuellmich started hearing concerns from family and friends in Germany about a new respiratory virus, one particular name kept popping up: professor Christian Drosten, Ph.D., a German virologist.

As head of the Institute of Virology at the University of Bonn Medical Centre, Drosten is best known for developing the first diagnostic test for SARS in 2003. He also developed a diagnostic test for the swine flu,6 and in 2009 helped drum up panic with doomsday prophesies about H1N1.