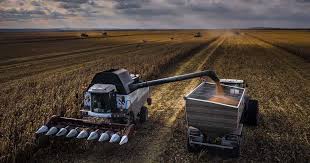 ProPublica is a nonprofit newsroom that investigates abuses of power. Sign up to receive our biggest stories as soon as they're published.

This article, the third in a series on global migration caused by climate change, is a result of a partnership between ProPublica and The New York Times Magazine, with support from the Pulitzer Center.

IT WAS ONLY November, but the chill already cut to the bone in the small village of Dimitrovo, which sits just 35 miles north of the Chinese border in a remote part of eastern Russia's Jewish Autonomous Region. Behind a row of sagging cabins and decades-old farm equipment, flat fields ran into the brambly branches of a leafless forest before fading into the oblivion of a dreary squall. Several villagers walked the single-lane dirt road, their shoulders rounded against the cold, their ghostly footprints marking the dry white snow.

A few miles down the road, a rusting old John Deere combine growled on through the flurries, its blade churning through dead-brown stalks of soybeans. The tractor lurched to a halt, and a good-humored man named Dima climbed down from the cockpit. Dima, an entrepreneur who farms nearly 6,500 acres of these fields, was born in the Liaoning Province of northeastern China — his birth name is Xin Jie — one of a wave of Chinese to migrate north in pursuit of opportunity in recent years. After Dima's mostly Chinese laborers returned home this year amid the COVID-19 pandemic, he has been forced to do much of the work himself. Bundled against the wind in a camouflage parka, he bent to pick a handful of slender pods from the ground, opening one to reveal a glimpse at Russia's future.

A great transformation is underway in the eastern half of Russia. For centuries the vast majority of the land has been impossible to farm; only the southernmost stretches along the Chinese and Mongolian borders, including around Dimitrovo, have been temperate enough to offer workable soil. But as the climate has begun to warm, the land — and the prospect for cultivating it — has begun to improve. Twenty years ago, Dima says, the spring thaw came in May, but now the ground is bare by April; rainstorms now come stronger and wetter. Across Eastern Russia, wild forests, swamps and grasslands are slowly being transformed into orderly grids of soybeans, corn and wheat. It's a process that is likely to accelerate: Russia hopes to seize on the warming temperatures and longer growing seasons brought by climate change to refashion itself as one of the planet's largest producers of food.