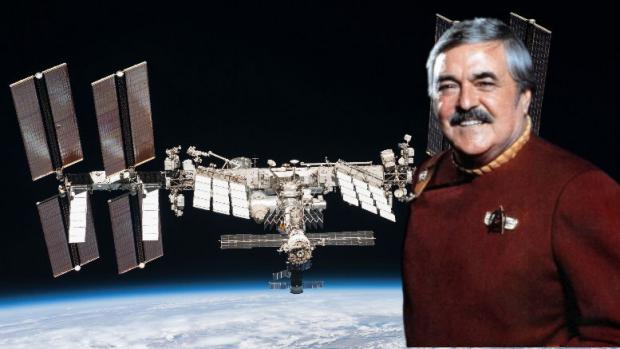 The ashes of the late James Doohan, who played chief engineer Montgomery Scott on the original Star Trek television series, have been aboard the International Space Station for 12 years — and the Times of London has the fascinating backstory of how it happened. Doohan died in 2005 at the age of 85, and his family wanted to fulfill his wish of getting on the ISS.

Official requests to bring Doohan's ashes on the ISS were denied, but Richard Garriott — one of the first private citizens to travel on the space station — managed to smuggle some of Doohan's ashes into the space station's Columbus module. Garriott says he took a laminated picture of Doohan and some of his ashes and put it under the floor of the Columbus. He didn't tell anyone about the scheme — only he and Doohan's family knew until now.

"It was completely clandestine," Garriott told the Times. "His family were very pleased that the ashes made it up there but we were all disappointed we didn't get to talk about it publicly for so long. Now enough time has passed that we can."

It's not the first time Doohan's ashes have made into the heavens. A portion of his ashes were aboard SpaceX's Falcon 1 rocket in 2008, but that rocket failed minutes after launch. And in 2012, an urn with some of Doohan's ashes flew into space aboard the SpaceX Falcon 9. According to the Times, Doohan's ashes have traveled some 1.7 billion miles across space, and have orbited the Earth more than 70,000 times.

No Guns Seized from Capitol Demonstrators and No Shots Fired – Except by a Security Guard...