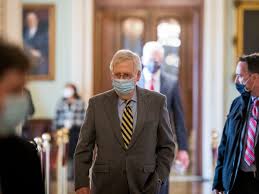 ,,,which Trump said "fails to include critical national security measures, includes provisions that fail to respect our veterans and our military's history, and contradicts efforts by my Administration to put America first in our national security and foreign policy actions."

A two-thirds majority was needed to override the veto - which would mark the first in Trump's presidency. The NDAA authorizes over $740 billion in military programs and construction, as well as 3% pay raises for US troops. It also contains a provision to rename military bases named after Confederate generals.

Trump also wanted to force a repeal of Section 203 protections for social-media companies enjoy due to their constant editorializing of user content, however lawmakers refused to include the provision.

The rare January 1st session comes as the new Congress is set to be sworn in on Sunday.

On Wednesday, the Senate voted 80-12 to begin an official debate on overriding the veto, proving that Congress can act with lightning speed when properly motivated.

Senate Majority Leader Mitch McConnell (R-KY) said on Tuesday that the NDAA is crucial to national defense, and to "deter great power rivals like China and Russia." The bill "will cement our advantage on the seas, on land, in the air, in cyberspace and in space," he added.

During Trump's time in office, he has vetoed eight other bills - several of them focused on foreign policy and national security issues, according to the Wall Street Journal.