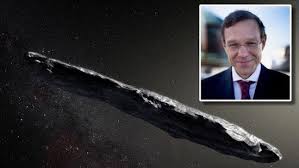 Avi Loeb, chair of Harvard's Department of Astronomy, believes he's already found some of that garbage.

In his upcoming book, "Extraterrestrial: The First Sign of Intelligent Life Beyond Earth" (Houghton Mifflin Harcourt), out Jan. 26, the professor lays out a compelling case for why an object that recently wandered into our solar system was not just another rock but actually a piece of alien technology.

On Sept. 9, its trajectory brought it closest to the sun. At the end of September, it blasted at about 58,900 miles per hour past Venus' orbital distance, and then, on Oct. 7, it shot past Earth's before "moving swiftly toward the constellation Pegasus and the blackness beyond," Loeb writes in the book.

The object was first spotted by an observatory in Hawaii containing the Panoramic Survey Telescope and Rapid Response System (Pan-STARRS) — the highest-definition telescope on Earth.