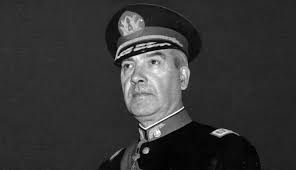 The felony-murder rule holds that if a person is involved in the commission of a felony in a conspiracy with others, he can be charged with murder even though others in the conspiracy did the killing.

When I read that, I immediately thought about the kidnapping and murder of Chilean General Rene Schneider, who was killed in 1970. In fact, it's interesting that while the members of Congress and the mainstream press express shock and outrage over recent events in the Capitol, they have long been non-plussed by the shocking and outrageous violence that U.S. government officials instigated and in which they participated in 1970.

Schneider was the overall commander of Chile's armed forces. He was a man of deep integrity, had a family, and believed that it was duty of the military to support and defend the constitution of the country.

In the 1970 presidential election, the Chilean people delivered a plurality of votes to a man named Salvador Allende, who U.S. officials reviled because he was a socialist. Like President Kennedy ten years before, Allende was interested in establishing friendly relations with the communist world, including the Soviet Union and Cuba, two official Cold War enemies of the U.S. national-security establishment. Keep in mind that in 1970, the Cold War was still continuing and that the communists were defeating U.S. military and CIA forces in the Vietnam War.