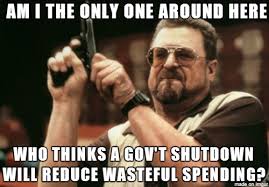 They Do Not Produce anything and only steal from you through taxation.

They are a middleman that wastes money.

They have always mismanaged the projects they touch.

They print currency out of thin air with the intent to not pay it back.

They are a drag on the economy as they take away wealth from the citizens.

They always corrupt processes as they can make money as bribes.

They build rules and regulation that stops real economic growth.

They create fees and taxes to fund themselves.

When they think their responses will help people, it makes them worse off.

When they spend, they destroy the value of the currency by creating more currency into supply.

They always end up going from the people's creation to control the people who created it.

They create laws and regulations, slowly taking away more and more of your rights over time as people get lazy.

They create a vehicle of control, and with that control, they become obsessive and want more.

Those in control can create laws and regulations that only they like, and no other people agree.

They imprison you for non-violent crimes.

They can make anything illegal and making people criminals doing nothing to hurt others.

They go to war to create growth.

The military it creates can and will, over time, be used against its own citizens.

They end up spying on everyone as they cannot be trusted themselves and believe that is the case for every citizen.

They create invisible borders that could cause infighting in regions.

They will murder millions for the greater good of their own conviction.

They run psychological operations on their own citizenry.

Collusion with either private health monopolies under government or free healthcare.

They make people sicker as it takes longer to get healthcare for everyone.

They lock down an economy creating more deaths than their so-called protecting the public from.

They allow for corruption.

They don't allow people to make their own health choices.

They enabled vaccines without 15 years of testing to be used on population as guniea pigs.

They do research on their own population without the peoples own concent.