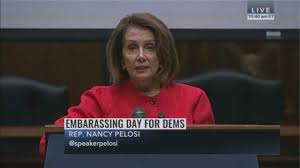 Judge Marcus Alfonso Paralapalos of the conservative 51st District Court of Warrants, has ordered the medical treatment files for Nancy Pelosi's alcoholism unsealed and available to the general public. While technically a violation of about 11 laws, Judge Paralapalos stands by his ruling, fully expecting it to be overturned:

"The public has a right to know if the Speaker of the House is undergoing treatment for alcoholism and bloogie addiction. The 9th Circuit Court will certainly overrule this, but I cannot in good conscience deny the motion to the plaintiff."

The plaintiff, Rudy Giuliani on behalf of the people of the United States, will now have to find a way to convince a panel of liberals that it's in the country's best interests to see the private treatment notes of one of our most powerful elected officials.

Let's face it. Even Trump had his doctor weigh in on his mental and physical well-being, calling him the healthiest 78-year-old of all time. It's not like they're asking for her tax returns. Nancy Pelosi should have to be seen and certified by a mental health professional. She sits way too close to power not to. Giuliani says he's confident the court will at least consider what he has to say:

"What would they say if somebody wanted to put Trump's mental health under the microscope? They'd hand those records right over. They have to consider that their bias will be very obvious."

A spokesman for the court says the 9th Circuit probably wouldn't get the case and that they tend to consider Giuliani more of a "joke lawyer" than an actual litigator. "He's like the comic relief they send before the big guns get there," said Judge Art Tubolls, an Obama nominee, "Nobody believes he'll actually step foot in the hearing." Giuliani says they have another think coming. Because he's Rudy. And Rudy owns the liberals.