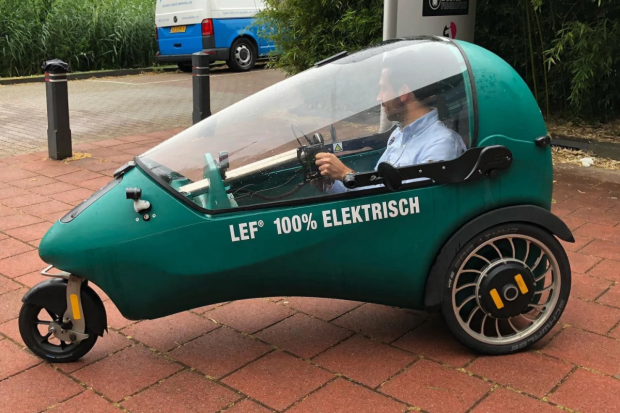 Designed by Erik Vegt and Dave Goudeket, who lead up Dutch company EV Mobility, the LEF has actually been around for about three years. That said, it's still not well heard-of outside of the Netherlands, which is currently the only country where it's nationally approved for use on public roads.

Its single occupant enters by lifting its clear canopy, pushing the telescoping racing steering wheel forward, sitting down, then pulling the steering wheel back out and shutting the canopy. Squeezing the steering wheel-mounted throttle control takes the vehicle to a top speed of 25 km/h (16 mph) – so needless to say, the LEF is better suited to bike lanes than to freeways.

It's propelled by a 1,000-watt motor in one of its rear wheels, which is in turn powered by a 10-Ah/48-volt lithium battery. That battery can be charged from a household electrical outlet, with one charge reportedly being good for a range of about 30 km (19 miles). Buyers can double or triple that range by opting for a 20-Ah or 30-Ah battery.

The LEF's main body is made of recyclable polyethylene, with the whole vehicle reportedly tipping the scales at 90 kg (198 lb). It can handle a maximum payload of 200 kg (441 lb).