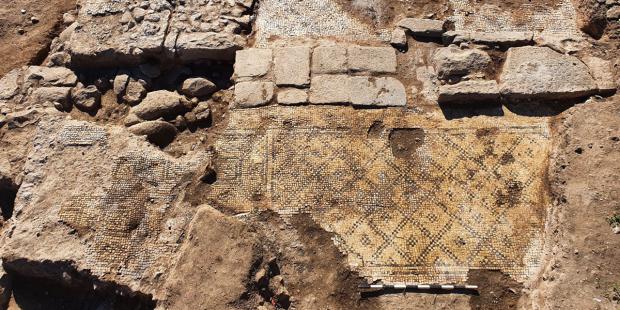 A 1,500-year-old plaque that reads 'Christ, born of Mary' in ancient Greek that once sat above a doorway to ward off evil spirits has been unearthed in northern Israel

The phrase was used by Christians to protect themselves against the 'evil eye,' which was an ancient curse from Greek and Roman cultures that would bring misfortune on unsuspecting individuals.

The inscription was uncovered during an excavation of a once-magnificent church that had elaborate mosaic tiling with intricate geometric designs and was built in the Byzantine or Early Islamic period.

The building was discovered during a salvage dig prior to a new road construction project in the area – Israel requires archaeologists and volunteers investigate an area before construction can start.

Christianity became a prominent religion in Israel during the Byzantine era after the Roman Empire took hold of the country.

This siege resulted in numerous Christian churches and monasteries being constructed across the Hebrew nation.

The latest discovery was uncovered in the et-Taiyiba village on the northeast side of Jezreel Valley between the modern cities of Afula and Beit Shean.

Dr Walid Atrash of the Israel Antiquities Authority said: 'This is the first evidence of the Byzantine church's existence in the village of et-Taiyiba and it adds to other finds attesting to the activities of Christians who lived in the region.'

Fireside Chat Ep. 174 -- A Dialogue About God and Ayn Rand