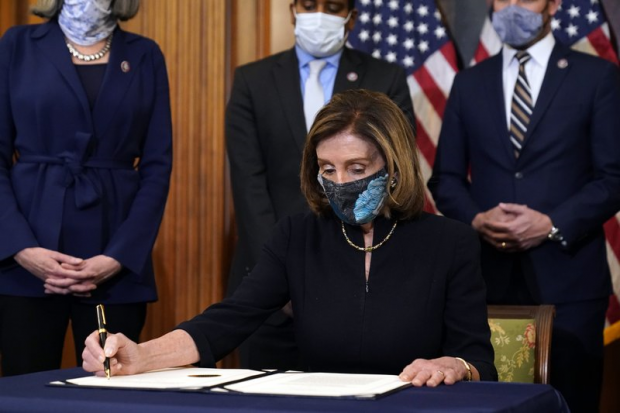 House Speaker Nancy Pelosi plans to send the article of impeachment against Donald Trump to the Senate on Monday, launching the start of the former president's trial on a charge of incitement of insurrection over the deadly Capitol riot.

Trump is the first president to be twice impeached and the first to face a trial after leaving office.

While the transmission of the article launches the trial, the schedule ahead remains uncertain.

On Thursday, Senate Republican leader Mitch McConnell proposed pushing back the start Trump's impeachment trial to February to give the former president time to prepare and review his case.

House Democrats who voted to impeach Trump last week for inciting the deadly Jan. 6 Capitol riot say a full reckoning is necessary before the country — and the Congress — can move on.

But McConnell in a statement Thursday evening suggested a more expansive timeline that would see the House transmit the article of impeachment next week, on Jan. 28, launching the trial's first phase. After that, the Senate would give the president's defense team and House prosecutors two weeks to file briefs. Arguments in the trial would likely begin in mid-February.