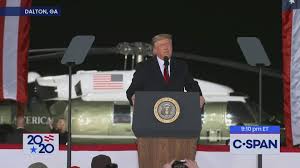 Out of an interest in not letting the public suffer any longer from my procrastination and weakness (I tested negative today after a 13-day bout with Covid) , I will be writing and publishing this story in installments, reserving  the right to re-edit as I go. Once complete and final, I will let the public know that it is final. Thus, you might think of this exercise as an odd one, where I am drafting a long magazine article for the world but doing so publicly, that the public need not wait to begin having its understandable curiosity addressed.

It will be natural for the reader to question my motives, my background, to wonder if I have some ax to grind or might wish to accomplish something in writing this other than what I claim (that I simply feel a duty to my country and to history to give an honest account of what I saw over those nine weeks).  So I will close this preface with four statements that clarify my philosophical orientation here.

My own family's history is one of the Horatio Alger dream.  My folks were of working class Irish roots from New Jersey (Bridgeport, Paterson, Atlantic City, Wildwood, and Cape May). My Pop was Rutgers '52 (Air Force ROTC), and my folks were living poor as church-mice on the GI Bill at University of  Michigan, my Pop studying actuarial math, when their three sons began popping into existence. I was the youngest, born in Ft. Wayne, Indiana, in 1962.  We grew up bouncing around New England as my father changed life insurance jobs nearly every year. Passed over in 1976 in Hartford for a promotion at Travelers Insurance that he thought he deserved, my Pop took a job at a broken and nearly insolvent auto insurer in the South: a month later an odd fellow from Omaha showed up on our doorstep, met my dad, and began investing heavily in his new firm. That same day, my Pop cancelled his order for our family's first new car (a station wagon) and sunk it into stock in his new friend's firm.

OUTRAGEOUS: After Abandoning Trump and Allowing Landslide Election to be Stolen,