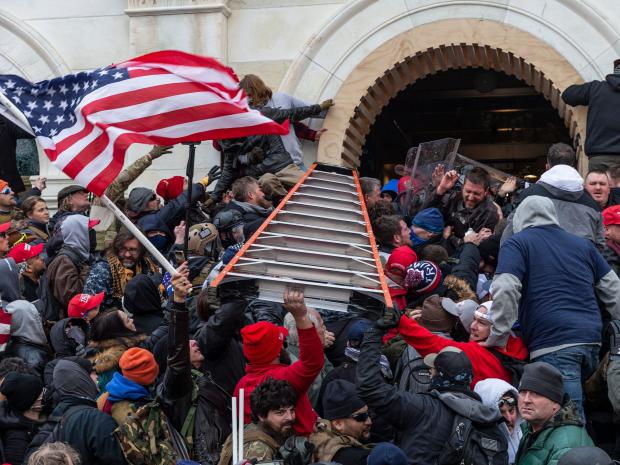 A Virginia man accused of helping to 'plan and coordinate' the January 6th Capitol breach claims he's not a member, much less a leader, of the Oath Keepers - a group commonly described in the press as 'far-right' extremists - and that he wasn't at the Capitol on January 6th due to what his attorney described as "physical limitations" that would have prevented his travel in the first place.

In a Monday court filing, 66-year-old Thomas Caldwell also claimed he's held a top-secret security clearance since 1979, ran a consulting firm that did classified work for the US government, and worked as a FBI section chief from 2009 to 2010 - a job the Associated Press says typically requires 'rising through the ranks of the bureau.'

Thomas Caldwell, who authorities believe holds a leadership role in the extremist group, worked as a section chief for the FBI from 2009 to 2010 after retiring from the Navy, his lawyer, Thomas Plofchan, wrote in a motion urging the judge to release him from jail while he awaits trial.

The defense said Caldwell, who has denied being part of the Oath Keepers, has held a top-secret security clearance since 1979, which required multiple special background investigations, according to Plofchan. Caldwell also ran a consulting firm that did classified work for the U.S. government, the lawyer said.

Caldwell's lawyer said his client retired as a lieutenant commander with the Navy and that he was a "100% disabled veteran." Caldwell suffered from complications related to a "service-connected injury," including shoulder, back and knee issues, the attorney said. In 2010, Caldwell had spinal surgery, which later failed and led to chronic spinal issues and a diagnosis of post-traumatic stress disorder, according to the court filing. -Associated Press