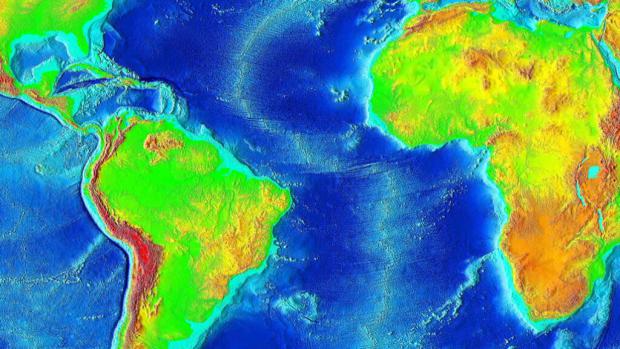 Not surprisingly in today's politically correct world, Temming's article does not mention ocean warming. Instead, the title of the piece enthuses that "An upwelling of rock beneath the Atlantic may drive continents apart." Notice that the title does not mention the hot rock.

Same with the subtitle: "The Mid-Atlantic Ridge may play a more active role in plate tectonics than thought." No mention of hot rocks there, either.

But I think the hot rocks are the most important takeaway from her article.

Anyway, back to Temming's article.

New seismic data from the Atlantic Ocean floor show that hot rock is welling up beneath the Mid-Atlantic Ridge from more than 600 kilometers deep in Earth's mantle, says Temming. (She loves calling it 'hot rock,' but in reality it's red-hot fiery basalt, the ocean's version of red-hot lava.)

Matthew Agius, a seismologist at Roma Tre University in Rome, and his colleagues used 39 seismometers on the seafloor along the ridge between South America and Africa to monitor earthquakes around the world for about a year. The tremors contained clues about the location and movement of material far below the seafloor.