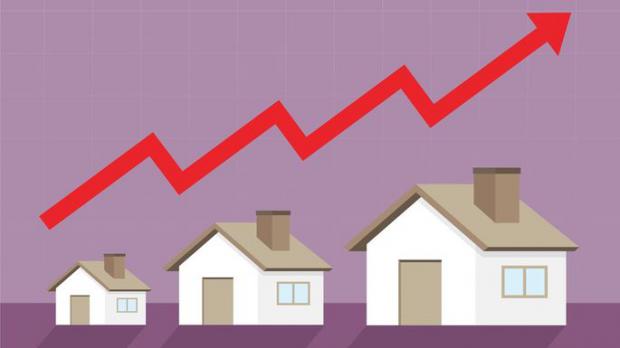 Meanwhile, U.S. housing prices have finally eclipsed their peak from 2005 in the years leading up to the Great Recession. Note that at the beginning of 2021, we said real estate was entering the year in a "massive bubble".

A combination of low interest rates and trillions in freshly printed dollars has led to the the median price of a single family home rising 14.9% to $315,000 in Q4. It was "the biggest surge in data going back to 1990, according to the National Association of Realtors," according to Bloomberg.

"Prices rose in all 183 metros measured by the group and 161 had double-digit growth compared with just 115 of them in the third quarter," the report notes.

The move was most pronounced in the Northeast, which saw a 21% gain as a result of buyers leaving cities and flocking to the suburbs. Fairfield County, Connecticut led the way, rising 39%. We have written extensively, not just about families moving to the suburbs, but also corporations. Over the past year, we've presented a ton of evidence (see: here & here & here) of city dwellers fleeing for the exits, some of which was due to the virus pandemic unleashing a technological wave of remote working, allowing these folks to work anywhere with an internet connection.

In addition to new work-from-home rules, low borrowing costs have also helped people along in their decision to relocate. The rise in prices can be a bad omen for those looking to buy. The obvious decision is for people to leave expensive areas like New York and San Francisco in favor of more affordable areas. Surging home prices, as we pointed out in January, mean that young Americans can't afford to buy, and a record 34% of them now live with their parents...

Lawrence Yun, chief economist at NAR, concluded: "The average working family is struggling to contend with home prices that are rising faster than income. This sidelines a consumer from becoming an actual buyer, causing them to miss out on accumulating wealth from homeownership."