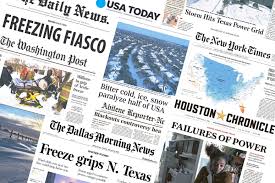 Instead Texas spent most of the last decade and billions of dollars trying to cool the world by changing its electricity grid.

Thanks to market-distorting policies that favor and subsidize wind and solar energy, Texas has added more than 20,000 megawatts (MW) of those intermittent resources since 2015 while barely adding any natural gas and retiring significant coal generation. — Jason Issac

Indeed Texas has the fifth largest windpower fleet in the world — bigger than everyone except China, the USA, Germany and India. But having that industrial fleet of free clean energy didn't save Texas this week. What happened appears to have been a systemic wide failure on so many levels. But one of those levels surely, is the failure to winterize the grid. There are plenty of gas and wind plants in colder places like Canada and they run through winter just fine.

But the awful truth is, that it costs more to add these "heat and de-icing" features and with everyone planning for Global Warming, well, who needs 'em?  It's almost like ERCOT in Texas assumed the weather would never get that cold again. Like perhaps they were afraid of endless droughts, more cyclones, and deadly heatwaves, but not Arctic ice storms?

Renewables fans will point to this as mere incompetence. But if the government had built the "fifth largest nation" of windmills with all the cold bells and whistles, it would make them even more unaffordable.  Anyone with infinite money can make wind plants more useful in cold weather, but it makes them more expensive all year.