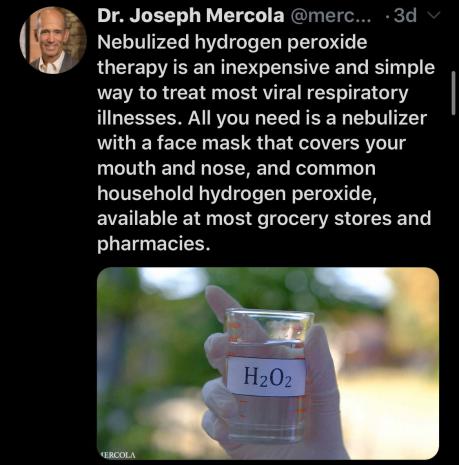 A peer-reviewed consecutive case series of 107 COVID-19 patients treated with nebulized peroxide and other remedies, including oral vitamins A, C and D, iodine, intravenous hydrogen peroxide and iodine as well as intravenous (IV) vitamin C, along with intramuscular ozone, was published in the July 2020 issue of Science, Public Health Policy, and the Law.1 All patients survived.

At the time of this interview, the number of patients successfully treated with these all-natural strategies exceeds 230, and he has now published a book describing his approach, titled "A Holistic Approach to Viruses."  The Holistic Health Ha...

"[Among] our [COVID-19] patients, we've had no deaths," he says. "We've had a couple of hospitalizations, but much smaller than should be for the reported statistics. And we're still using the same protocol we've been using for 25 plus years for flu and flu-like illnesses.

A patient I called over the weekend told me 'There are two things out of what you gave me that I could tell really made me feel better.' I gave him the whole protocol of oral vitamin A, C, D and iodine and nebulized peroxide and iodine.

He said, 'I forgot to use the iodine the first day or two. When you asked me about it, I re-added it back in orally. That made the difference. My mucus thinned out, my breathing was better. I forgot to put the iodine in the nebulizer [too], and [when] I did both at the same time — the oral iodine and the nebulized hydrogen peroxide with iodine — everything cleared up …'

His breathing was 80%, 90% better shortly after the first or second dose of iodine. He's another success story that we've had, which is supporting people's immune systems during these viral illness times … I would implore my colleagues to add iodine into whatever regimen you're using to treating patients who are ill with flu-like illnesses such as COVID-19."