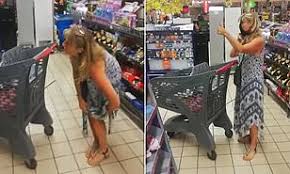 This is the moment a female shopper whipped off her underwear to use as a make-shift face mask after being warned by staff she would not be served without one.

The unnamed woman was filmed at a Pick n Pay supermarket in South Africa after a security guard asked her to put on a face mask.

She claimed that she did not have one but, after threatening to remove her from the supermarket, the woman reached under her dress and whipped off her thong to use instead.

In the clip, the woman can be seen standing in a long Paisley-print dress and sandals as she waits at the checkout queue.

A female security guard walks slowly toward her before the pair exchange words.

Suddenly the disgruntled shopper bends over and reaches her hand up her dress to reach her underwear.

She tugs at it before slipping the black thong off her feet and placing it instead over her face.

Other shoppers look on in astonishment as one shouts: 'What's going on?'

The confusion continues as the shopper sticks a thumbs up in the guards direction and asks: 'Happy?'