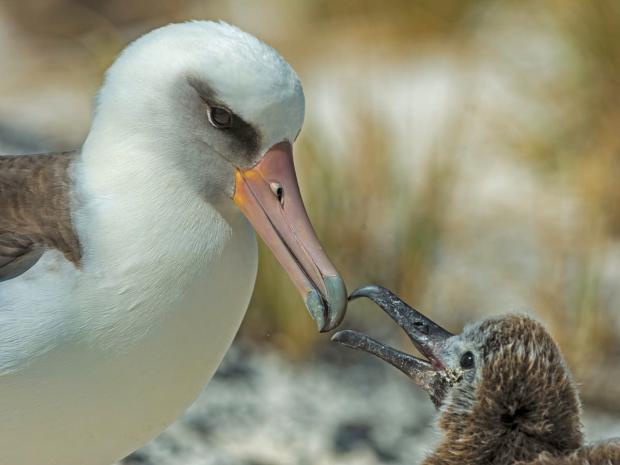 The world's oldest-known wild bird, a 70-year-old Laysan albatross called 'Wisdom', has hatched another chick — making this at least the 40th youngster she has reared.

The septuagenarian seabird hatched and egg again last month on the breeding habitat of Midway Atoll, a tiny island in the Pacific, some 1,300 miles from Hawaii.

Wisdom was first given an identification band back in 1956 at which time she was estimated to be around five, the age at which albatross become sexually mature.

She has been raising chicks with her current mate — a male called 'Akeakamai' — since 2010, experts from the US Fish and Wildlife Service have said.

Laysan albatrosses — named for one of the main islands on which they breed — are relatively small gull-like albatrosses that can be found in the north Pacific.

They spend nine-tenths of their life out at sea, meaning that researchers can only study them when they return to their breeding grounds around the Hawaiian islands.

'Her return not only inspires bird lovers everywhere, but helps us better understand how we can protect these graceful seabirds and the habitat they need to survive into the future,' a US Fish and Wildlife Service spokesperson told the Independent.

First scientifically described in 1893 by the British zoologist and banker Lionel Walter Rothschild, Laysan albatrosses are the second-most common seabird in the Hawaiian Islands, with an estimated population of some 2.5 million birds.

Until the 21st century, it was thought that the seabirds typically lived for around 40 years, until Wisdom proved this assumption false.