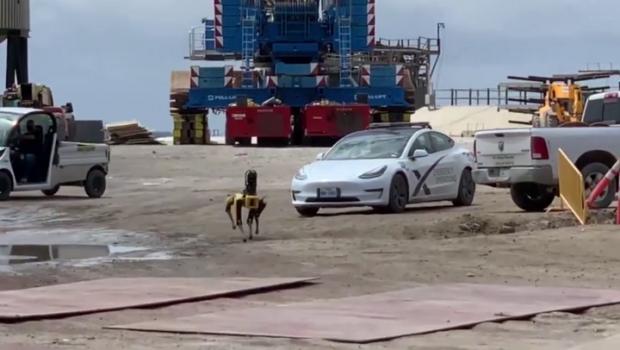 Video of a robot dog patrolling the area of a SpaceX rocket's wreckage site has gone viral after viewers compared it to an eerily familiar scene in Black Mirror.

The four-legged mechanic dog, manufactured by Boston Dynamics, was named Zeus by workers at SpaceX.

It was sent to the tech company's south Texas site, Boca Chica, to inspect the wreckage of the rocket prototype known as Starship serial No. 10, or SN10.

Twitter user @SpacePadreIsle, who also runs website spadre.com, posted a clip to show Zeus carrying out its task at the site to search for potential hazards.

The yellow-coloured robot dog shuffles its way past a SpaceX-marked vehicle while the cameraman whistles, saying: "Come here boy!"

Zeus seems to have picked up his call and immediately turns right and walks towards the camera.

But viewers were left creeped out by the scene and said it reminded them to Netflix dystopian drama Black Mirror.

One said: "This definitely looks like a Black Mirror episode."

"Waiting for it to start shooting," a third chillingly joked.