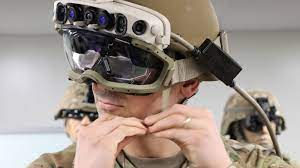 -Microsoft will deliver to the U.S. Army more than 120,000 devices based on its HoloLens augmented reality headset.

-The deal, which could be worth as much as $21.88 billion over 10 years, follows a contract Microsoft received to build prototype headsets for the Army.

-The contract comes a year and a half after Microsoft won a cloud contract from the Pentagon that could be worth up to $10 billion.

The U.S. Army said Wednesday that Microsoft has won a contract to build more than custom HoloLens augmented reality headsets. The contract for over 120,000 headsets could be worth up to $21.88 billion over 10 years, a Microsoft spokesperson told CNBC.

Microsoft shares moved higher after the announcement. The stock was up 1.7% to $235.77 per share at the end of Wednesday's trading session.

The deal shows Microsoft can generate meaningful revenue from a futuristic product resulting from years of research, beyond core areas such as operating systems and productivity software.