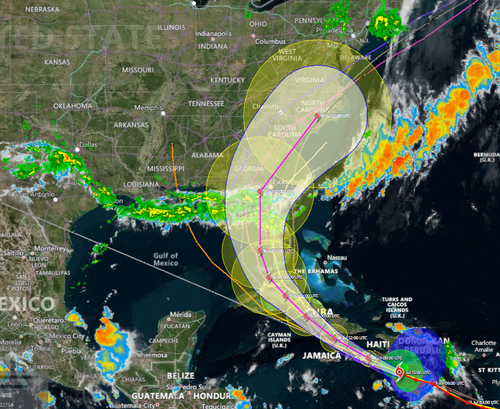 Hurricane spaghetti models forecast Elsa may remain just west of South Florida, but some models show a direct strike. It's still too early to gauge the long-term track of the storm.

As of 1100 ET, the National Hurricane Center (NHC) published data showing the storm is headed west-northwest at a blazing speed of 29 mph, located 40 miles southeast of Isla Beata, Dominican Republic.

Elsa's intensity is expected to moderate later this weekend when it traverses Cuba. By early next week, the storm is expected to either pass to the west of South Florida and or a direct hit.

The threat of impact prompted Miami-Dade Mayor Daniella Levine Cava to sign a local state of emergency for the area. She announced the emergency order during an update Saturday morning on the Surfside, Florida condo tower collapse.