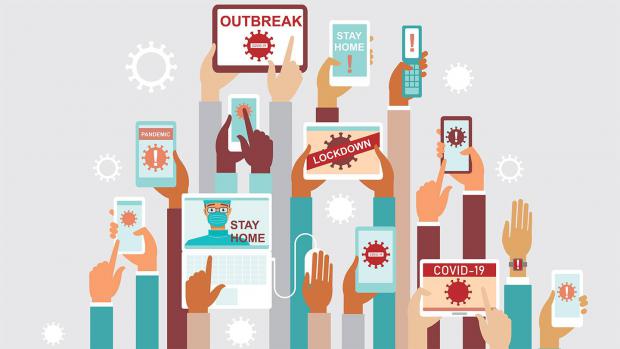 When a new epidemic is launched and promoted, despite the lack of good science and good evidence, it is jacked up on television screens. Images begin to flow:

An emergency medical vehicle on a street. EMT personnel, in hazmat suits, load a man strapped down to a stretcher, into the van. On another street, a man collapses on the sidewalk. We see a quarantined man sitting inside a huge plastic bubble on a third street. Cut to an airport lobby. Soldiers are patrolling the space among the crowds. Cut to a lab. Close-up of vials of liquid. Camera pulls back. Techs in light green scrubs are placing the vials into slots of a table-top machine. Auditorium—a man on a platform, wearing a doctor's white coat, is pointing a wand at a large screen, on which a chart is displayed, for the audience. Back to the street. People are wearing face masks.

These images wash over the television viewer. Meanwhile, the anchor is imparting his prepared meaning: "The government today issued a ban on all travel into and out of the city…hundreds of plane flights have been cancelled. Scientists are rushing to develop a vaccine…"

The television audience has an IMPRESSION of knowing something. They're in the flow, the flow of the news…they're in the images…

—Network, the 1976 film written by Paddy Chayefsky, reveals what media kings would do if they unchained their basic instincts and galloped all the way into the madness of slash-and-burn Roman Circus.