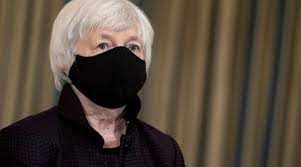 Yesterday, we were treated to a double-whammy of US economic pontificating. First we had Fed Chair Powell go through his "transitory" shtick for Congress for the second day in a row: as with all shtick, it's better the first time you see it.

This time round he was pressed harder on why the Fed is still piling in so much monetary support when headline inflation is so high. Powell replied the latter was due to "opening up" and is "unique" in history. Which, even allowing for Covid, shows like most central bankers, and economists, he reads no economic history. Such inflation has occurred in the past in many countries, and there is no shortage of supply of interesting comparative examples if one recognizes the problem for what it is - supply-chain shock, and then demand-shock related, not the easier sounding "opening up".

Straight off the top of my head, how about when France seized the Ruhr from Weimar Germany in 1923, resulting in a loss of critical German industry, and a general strike by its industrial work-force, whom the German government continued to pay to do nothing out of national sympathy? Note how that ended up in terms of hyperinflation. Of course, one must also stress that the post-WW1 Weimar Papiermark was hardly the equivalent of the global reserve US Dollar today, and Germany's huge, unpayable post-war debt was in a foreign currency – gold. As such, the likelihood of the US repeating this experience like-for-like is minimal; but that does not mean some of the underlying lessons are not applicable in terms of the kind of problems that can appear, at least as one of a series of heuristics for policy-makers to keep at hand.