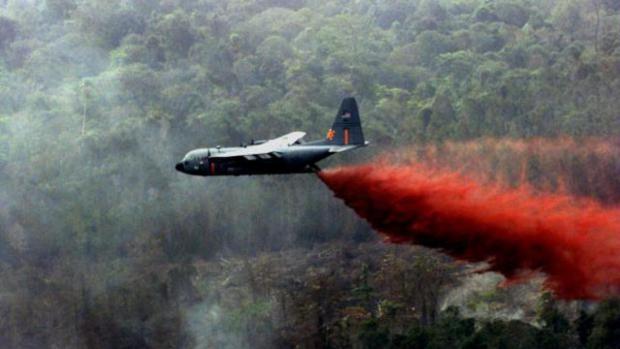 When Carol Van Strum moved to Five Rivers, Oregon, in 1974, she thought she had found the perfect rural idyll.

Surrounded by National Forest, her four young children could grow up close to nature. They loved fishing and playing by the river, fascinated by the little 'dipper' birds that sat on the rocks.

'They knew everything that lived down there,' she recalls. 'There were beavers and otters in the river, and all the fish and herons and ospreys. So they just were part of that.'

Then one day the children fell sick, choking and gasping.

Down at the river, Carol found a scene of devastation — dead ducklings, crayfish and trout.

The cause seemed fairly obvious: a U.S. Forestry Service helicopter had been flying overhead the day before, spraying something over the land.

Nobody knew what it was but, 'a lot of people assumed, "Well it's the government doing it, it must be OK," ' says Carol. 'We called the fire service and they said: "Oh no, it's perfectly safe." ' But it wasn't.

The chopper was spraying a herbicide known as 2,4,5-T — the highly toxic main ingredient of Agent Orange, the notorious chemical defoliant used to blanket swathes of South-East Asia during the Vietnam War.

The U.S. military had stopped using it in 1971 because of growing public health concerns — but here it was being used in the U.S.

Agent Orange was the most devastating and enduring blight inflicted on Vietnam during the conflict, believed to have caused death or serious injury to up to a million victims. Its most toxic element, a dioxin known as TCDD, would soon wreak havoc in sleepy Oregon.

The herbicide drifted on to the Van Strums' land with disastrous effect. The family dog died and so did the garden.

And it wasn't just the Van Strums who suffered. The miscarriage rate among local women shot up within a month: one would-be mother eventually had 14 miscarriages.

Hunters began to find deformed fish, water fowl and deer. Fawns were born with no eyes, goslings hatched with their feet facing backwards or with only one wing, frogs had six legs.