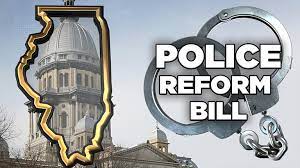 Union County, located in a rural area in the southern tip of the state, consists of 10 sworn deputies, currently dealing with an increasing number of meth-related drug offenses and psych cases that are typical in smaller communities, according to The Epoch Times.

Law enforcement in such areas are typically put in the position of having to wear multiple hats because resources, widely available in urban and suburban areas are hard to come by in smaller rural towns.

One might think that a state with the resources that Illinois done might do more to help such small agencies, however instead Democrats in Springfield, the state capital, make things much more difficult. And Sheriff Scott Harvel has seen enough.

After the legislature passed the "reform" act, Harvel said that he is no longer able to do the job he was sworn to do, that is protect the safety and welfare of county residents. So, after 34 years as a law enforcement officer, Harvel has submitted his resignation effective August 15, months before his term ends.

"My hope and prayers are that things come around and we get more support, but I don't think we are going to see that happen for a long time," Harvel told the Times.