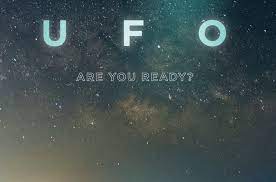 Using as its foundation The New York Times' 2017 article, "Glowing Auras and 'Black Money': The Pentagon's Mysterious U.F.O. Program," this intriguing investigation into flying saucers and the possible extraterrestrials manning their controls is an attempt at legitimizing a field of study that's long been ridiculed by the public at large, as well as mythologized by The X-Files, Hollywood blockbusters, and the innumerable conspiracy theorists that populate the web.

On the basis of its first two episodes (which were all that was available at the time of this review), UFO is only partly successful in that endeavor.

Premiering Aug. 8, this tantalizing non-fiction effort employs a familiar docuseries format, melding interviews with journalists and "experts," archival photos, video clips, graphical diagrams, CGI recreations, TV news stories, newspaper headlines and declassified document text. In doing so, the series aims to portray its subject as no different than any other historical event or true-crime inquiry—a tack that's most convincing when it sticks to the aforementioned New York Times exposé, which revealed to the public that the government does acknowledge that there have been genuine UFO sightings and that it's looked into these events in the hopes of discovering the nature, origin, and purpose of the entities in question.