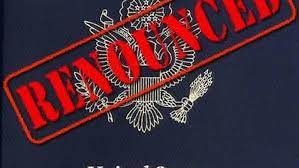 Earlier this year, we noted 6,705 Americans gave up their citizenship in 2020, a 260% increase from 2019 when 2,577 renounced their citizenship. People fleeing the country tend to have the economic mobility to do so and seek tax haven countries. They also seek areas that are safer (free of social unrest) and have more freedoms.

It's no secret that the Democrat's key campaign promise is higher taxes and that may have spooked wealthy people also.

For 2021, the number of Americans who renounced their citizenship this year is down, but that might be due to COVID restrictions at U.S. embassies and consulates that have delayed the process.

David Lesperance, an international tax lawyer based in Poland who helps people renounce U.S. citizenship, told Axios that there's a backlog of wealthy people trying to renounce their citizenship but "can't get the appointment" with the government because "the system's capacity has peaked."

Lesperance told Axios that the first process to renouncing citizenship requires obtaining citizenship in another country. He said, "it's a year-and-a-half to get an appointment at a Canadian embassy."