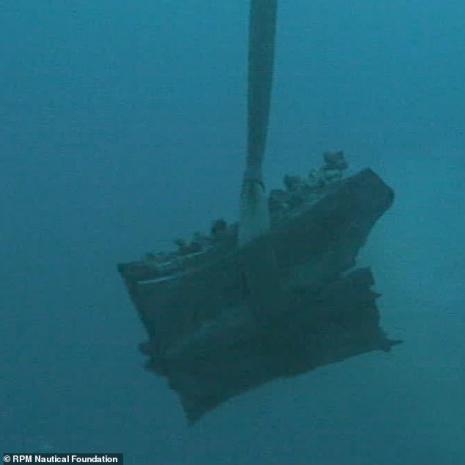 Four ancient bronze battering rams — each weighing a colossal 450lbs —  have been recovered from Roman wrecks that sunk off the coast of Sicily in 241 BC.

Originally attached to the bows of warships, the rams were used against the Carthaginian fleet during the Battle of the Aegates that ended the First Punic War.

Fought in the waters around Sicily and North Africa, this conflict between the Phoenicians and the Romans lasted 23 years — the longest naval war of antiquity.

Each once-gleaming ram boasts three blades on each side which would have been used to try to splinter the wooden hulls of enemy vessels.

Damage seen on some of the rams suggest that ships went head-to-head in collisions the team said must have been 'very violent'.

Accounts suggest that the Romans succeeded in sinking 50 Carthaginian ships.

The rams have not been the only underwater finds from the area this summer — with the wrecks of three merchant vessels, all loaded with ceramic jars, also found.

The archaeological efforts have been led by the Sicilian Marine Archaeology Unit, in tandem with the US non-profit the RPM Nautical Foundation.

According to the Greek Historians Polybius and Diodorus of Sicily, the Battle of the Aegates was held in the waters around the Aegadian Islands on March 10, 241 BC.

The Carthaginian fleet was led by Hanno, son of Hannibal, who had previously provided support to the military commander Hannibal Gisco during the Roman siege of Agrigentum, on the southern Sicilian coastline, in 262 BC.