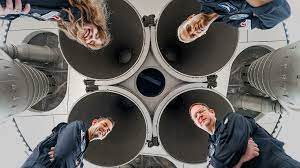 The quartet of amateur space travelers, led by the American founder and chief executive of e-commerce firm Shift4 Payments Inc, Jared Isaacman, were due for blastoff as early as 8 p.m. EDT (0000 GMT) from the Kennedy Space Center in Cape Canaveral, Florida.

SpaceX's senior director of human spaceflight, Benji Reed, told reporters at the Cape on Tuesday that "everything looked great" following a final "static" test-firing of the rocket engines on Monday morning.

"Right now the weather is trending well" for an on-time launch, he said.

The flight, with no professional astronauts accompanying SpaceX's paying customers, is expected to last about three days from liftoff to splashdown in the Atlantic.

They will fly aboard a gleaming white SpaceX Crew Dragon capsule, dubbed Resilience, perched atop one of the company's reusable Falcon 9 rockets and fitted with a special observation dome in place of the usual docking hatch.