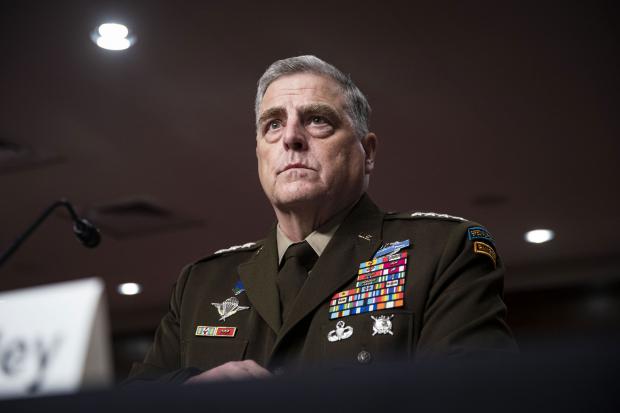 President Joe Biden said he has 'great confidence' in Joint Chiefs of Staff Chairman General Mark Milley after the embattled military man admitted on Wednesday he spoke to his Chinese counterpart in coordination with defense officials - but the acting Pentagon chief at the time said he 'did not' authorize the calls.

Milley was responding to a bombshell report that claims he phoned his counterpart there behind Trump's back over concerns the ex-president would take rogue action to stay in office.

'I have great confidence in General Milley,' Biden said to reporters on Wednesday afternoon.

He was asked about whether the general did the 'right thing' after a meeting with business leaders and CEOs to discuss the US COVID-19 response.

But former Acting Defense Secretary Chris Miller, who would have led the Pentagon when Milley made the January call, said he 'did not and would not ever authorize' the general to have the 'secret' calls.

Miller called on Milley to resign.

'The Chairman of the Joint Chiefs of Staff is the highest-ranking military officer whose sole role is providing military-specific advice to the president, and by law is prohibited from exercising executive authority to command forces,' Miller told Fox News.

'Build Back... You Know, The Thing': Americans Have No Idea What's In Biden's Econom

The Specter of One World Government Looms Large

"The Bidens": Is The First Family Corrupt, Or Merely Crazy?

WILL YOU LET YOUR KIDS REPORT FOR THE DRAFT UNDER A BIDEN-RUN MILITARY?