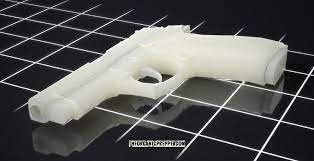 Nobody loves controlling others more than the government, so it's no surprise that they're desperate to ban 3-d printed guns. Right now, the US legislature has introduced two separate yet identical bills that would outright ban the creation of 3D-printed guns or the dissemination of the code for doing so.

HR 4225 was introduced to the House Committee on the Judiciary on June 29 of this year by Representative Ted Deutsch (D-FL). A few short days later, an identical bill, S.2319, was introduced by Senator Ed Markey (D-MA) in the Senate. [Source]

They're ready to take gun control to a whole new level with this.

But you may know it as its mainstream media coined term: The Ghost Gun Ban

According to the US government, the stated intention of S.2319 is "to amend chapter 44 of title 18, United States Code, to prohibit the distribution of 3D printer plans for the printing of firearms, and for other purposes." After the bill was introduced, 27 Senators throughout the US – all Democrat (with the exception of stated Independent, Bernie Sanders) – jumped on board to sign it. They are:

All these folks can't wait to ban 3-d printed guns.

What does this mean for aficionados if they ban 3-D printed guns ?