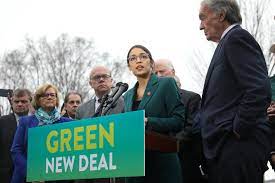 The Green New Deal isn't real. By that, I mean no bill in Congress sets out a list of specific government actions thought to be necessary to save the planet from carbon dioxide, heat waves, cold snaps, rising sea levels, ocean acidification, desertification, extinction, more rain and floods, more droughts, more trees, fewer tress, or whatever the latest existential threat de jour is. I wondered why we hear all the talk about a Green New Deal if that's the case.

According to Reuters, last April two of the usual suspects, Sen. Ed Markey and Rep. Alexandria Ocasio-Cortez again introduced "their set of aggressive climate goals intended to transform the U.S. economy. Initially introduced in 2019, the non-binding resolution seeks to eliminate U.S. greenhouse gas emissions within a decade and transition the economy away from fossil fuels."

I found confirmation from a disappointed Robinson Meyer, who wrote in the Atlantic, "With so much ballyhoo, it's become easy to miss the central, implacable fact about the Green New Deal: It does not exist…. Three years after the idea of a Green New Deal broke into the mainstream, you can't find an authoritative and detailed list of Green New Deal policies anywhere. There is no handbook, no draft legislation, no official report that articulates what belongs in a Green New Deal and what doesn't."