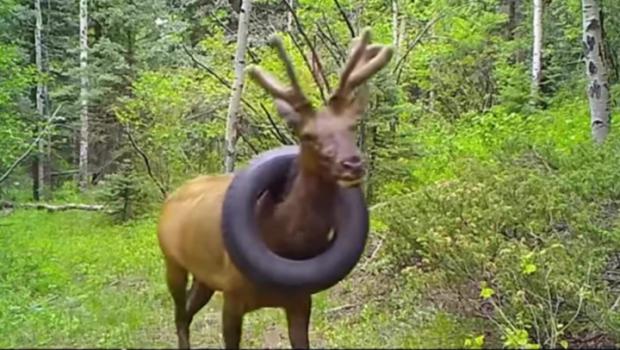 Tracking the elk for two years but never managing to get close enough to tranquilize the animal, Colorado Parks and Wildlife authorities cornered the four year-old bull at around 8:00 p.m. last Saturday.

Despite first seeing the animal two years ago, trail cam footage clearly showed the tire wasn't affecting the animal's ability to eat or drink. Still, fear of the tire becoming tangled in branches, or worse, in the antlers of another elk during the rut, continuously drove Parks and Wildlife staff to try and remove it.

Following a call from a resident who had seen the bull in their neighborhood, Wildlife officers Dawson Swanson and Scott Murdoch responded to what would be the last of four attempts to help the animal.

"I am just grateful to be able to work in a community that values our state's wildlife resource," Swanson said. "I was able to quickly respond to a report from a local resident regarding a recent sighting of this bull elk in their neighborhood. I was able to locate the bull in question along with a herd of about 40 other elk."

They had to get within close range to successfully find their mark with the tranquilizer. The ten-pointer, weighing over 600 pounds, regretfully had to lose one of his magnificent antlers in order to slip the tire off from around his neck, as the steel-bead reinforcements were too much for their small electric saw.

"We would have preferred to cut the tire and leave the antlers for his rutting activity, but the situation was dynamic and we had to just get the tire off in any way possible," said Officer Murdoch. Inside the tire they found 10 pounds of debris which had fallen into the air crevice. While causing minimal impediment to the animal's life, as observed from its size and health, the ring of the tire had begun to wear away on the elk's neck.