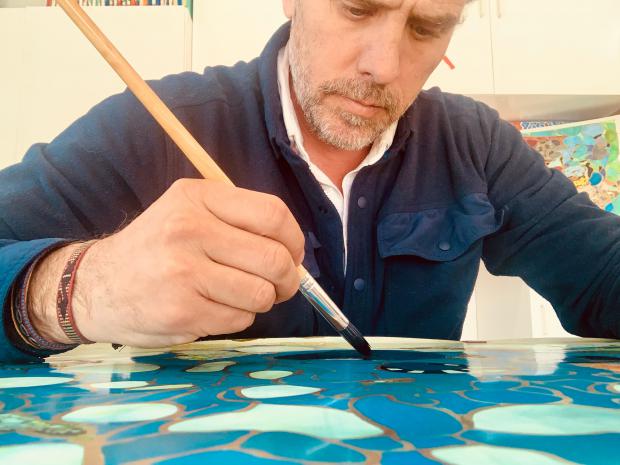 The picture was shared on Instagram - two days before Hunter's long-anticipated exhibition made a surprise opening at Bergès gallery in SoHo on Saturday - by renowned gossip columnist and celebrity interviewer George Wayne, who claims to have introduced Hunter to the dealer, Georges Bergès.

'GB shows up wearing a fabulous cap emblazoned with the Presidential seal and the words Camp David Presidential Retreat 46 all over it,' Wayne wrote.

'Say whaaa? Were you at Camp David last weekend with your artist Hunter Biden???!!!'

Though the writer is known for his tongue-in-cheek posts, a personal visit with the first family could prove a controversial move by the gallerist, who is under intense scrutiny amid fears that Hunter's art sales could be a conduit for corrupt attempts to financially influence the Biden family.

The White House claims neither they nor Hunter will know the identity of any patrons – but the one man tasked with keeping that secret is Bergès.

Former White House ethics chiefs have slammed the arrangement saying it is wide open to abuse, especially after evidence emerged from Hunter's abandoned laptop that he touted his powerful family connections in business deals with Chinese government-linked partners.