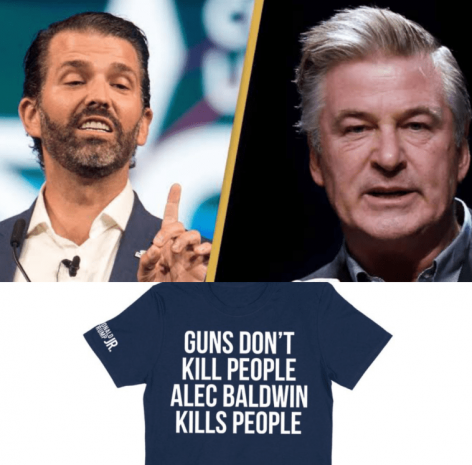 Donald Trump Jr has incurred a torrent of criticism for selling T-shirts mocking the death of cinematographer Halyna Hutchins after she was accidentally shot by Alec Baldwin on set last week.

The T-shirts, which are emblazoned with the words 'guns don't kill people, Alec Baldwin kills people', are being flogged on Trump Jr's website for $27.99.

It comes after Baldwin, 63, who has long been an outspoken advocate for gun control in the US, killed the cinematographer when he discharged a prop gun on the set of his new movie 'Rust'.

Trump Jr released the shirts via an Instagram story yesterday, urging his followers to 'get yours now' before posting a photoshopped image of Baldwin wearing the t-shirt.

New York tabloid The Daily News labelled Trump Jr the 'SPAWN OF HATIN' in response to the stunt, as critics slammed the move as 'deplorable' and accused him of doing 'anything to make a buck'.

The release of the t-shirts set social media ablaze as thousands of angry users railed against Trump Jr for his 'miserable' and 'disgusting' stunt.

Some took direct aim at Trump Jr, labelling the former President's son as 'scum' and 'repugnant', while others encouraged the Hutchins family to sue him for trying to profit off Halyna's demise.

Fred Guttenberg, the father of 14-year-old daughter Jaime Guttenberg who was murdered in the Parkland school shooting in February 2018, tweeted 'I know how her family feels' and called Trump Jr 'the scum of the earth' from a 'miserable family'.

Another user tweeted he hoped to see the Hutchins family 'sue Donald Trump Jr for every penny he's worth' for his 'utterly deplorable' stunt.