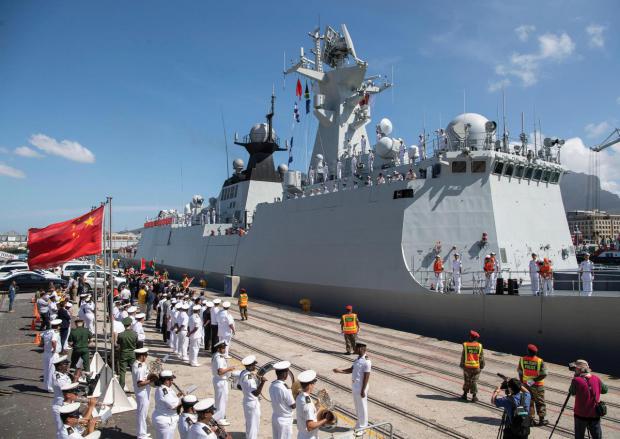 China now has the world's largest navy and is preparing to launch a new high-tech aircraft carrier by February, the Pentagon has revealed.

Beijing has 'numerically the largest navy in the world with an overall battle force of approximately 355 ships and submarines,' the Defense Department said last Wednesday in its annual report on China.

That compares with 296 warships at the US Navy's disposal, 69 vessels operated by the Royal Navy and 295 boats deployed by the Russian Navy.

Beijing is expected to add a third aircraft carrier in early 2022, dubbed Type-003, with satellite images from the shipyard published today indicating that it will rival the American super carriers.

Pictures of Jiangnan Shipyard from September to October show that significant progress has been made to the carrier's external components and that works on other vessels in the yard appear to have slowed, perhaps because the Type-003 has taken precedence.

Washington-based think-tank, the Center for Strategic and International Studies, says that the carrier could be ready as early as February, stating that it 'will launch in roughly three to six months.'

The US currently leads the world with 11 aircraft carriers, Britain operates two, including its brand new HMS Queen Elizabeth, while Russia owns a single carrier.

China's growing threat was underscored further as satellite pictures emerged of mock-ups of a US aircraft carrier and destroyer in its northwestern desert, believed to be used in wargames amid rising tensions between the nuclear-armed nations.