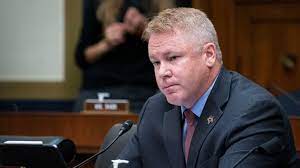 Davidson, who serves co-chairman of the Congressional Sound Money Caucus, told NTD News in an interview that the Biden administration's big-ticket spending proposals risk exacerbating inflation, which is running at a near 31-year high.

"The only debate on Capitol Hill is how much more gas to throw on the fire," Davidson said.

"It gets bigger, and that's the Democrats' agenda—they want to throw more on with Build Back Better," he said, adding that "it's going to dump a lot of extra spending into the economy and it has a big impact" on inflation.

"Whether you're talking about the American Rescue Plan, the infrastructure bill or Build Back Better—all part of this Bernie Sanders' agenda," Davidson said, alluding to the Vermont senator's various left-leaning or far-left policy positions, including proposing to cut the wealth of billionaires by half over 15 years and initially putting forward a $6 trillion budget proposal that he said was "probably too little."

"It is hostile to the American way of life and free enterprise. We're confronting a potentially fatal overdose of government. We need more freedom and less government—and we need to embrace sound money," Davidson said