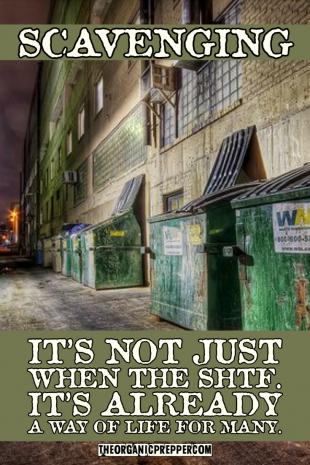 Here's a fun fact. Approximately one percent of the urban population in developing countries makes their living from scavenging. And more than 15 million people get their income from waste picking worldwide. Scavenging is a multi-billion dollar industry and a way of living for many, even in wealthy nations.

It's also one of the oldest economic activities known because living is consuming. Therefore we produce waste simply by existing. The type and amount of waste generated are constantly changing. The more wealthy and urbanized a society becomes, the more waste it will produce. A lot of folks think of scavenging as an activity that only happens after the SHTF, but it's a way of life for many on the planet.

Waste management is crucial. Most people are just content to have their trash magically disappearing from the front of their houses every day and give this no second thought. I suspect society, in general, would be a lot more discerning and restrained (and respectful) about consumption habits if a more significant number of people became more aware of this process and its implications, but I digress.

What's happening out there

Judging from what I have seen, the numbers above have grown rapidly since 2020. The social agents I speak with corroborate. The news is bad but still doesn't show an accurate picture.