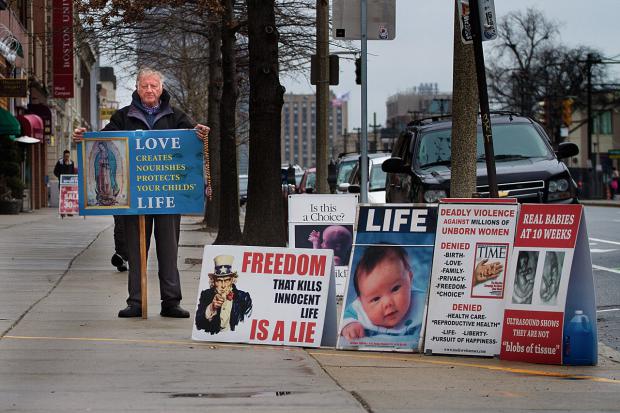 "Abortion on demand is the ultimate State tyranny; the State simply declares that certain classes of human beings are not persons, and therefore not entitled to the protection of the law. The State protects the 'right' of some people to kill others, just as the courts protected the 'property rights' of slave masters in their slaves. Moreover, by this method the State achieves a goal common to all totalitarian regimes: it sets us against each other, so that our energies are spent in the struggle between State-created classes, rather than in freeing all individuals from the State. Unlike Nazi Germany, which forcibly sent millions to the gas chambers (as well as forcing abortion and sterilization upon many more), the new regime has enlisted the assistance of millions of people to act as its agents in carrying out a program of mass murder."—Ron Paul

Who gets to decide when it comes to bodily autonomy?

Where does one draw the line over whose rights are worthy of protecting? And how do present-day legal debates over bodily autonomy, privacy, vaccine mandates, the death penalty and abortion play into future discussions about singularity, artificial intelligence, cloning, and the privacy rights of the individual in the face of increasingly invasive, intrusive and unavoidable government technologies?

Caught up in the heated debate over the legality of abortion, we've failed to think about what's coming next. Get ready, because it could get scary, ugly and overwhelming really fast.

Thus far, abortion politics have largely revolved around who has the right to decide—the government or the individual—when it comes to bodily autonomy, the right to privacy in one's body, sexual freedom, and the rights of the unborn.

In 1973, the U.S. Supreme Court ruled in Roe v. Wade that the Fourteenth Amendment's Due Process Clause provides for a "right to privacy" that assures a woman's right to abort her pregnancy within the first two trimesters.

Since that landmark ruling, abortion has been so politicized, polarized and propagandized as to render it a major frontline in the culture wars.

Find me a Democrat that would say this today...