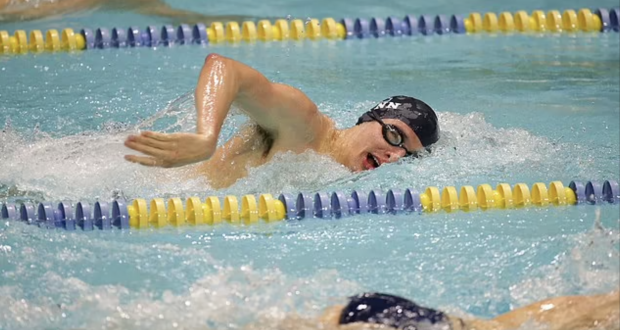 Video posted online showed the moment a transgender swimmer and senior at the University of Pennsylvania, who had spent three years competing as a man, smashed two US records while competing in a weekend contest - sparking new claims of unfairness.

Lia Thomas, 22, raced away from the other competitors at the Zippy Invitational Event in Akron, Ohio, on Sunday, finishing the 1,650-yard freestyle 38 seconds ahead of her teammate, Anna Sofia Kalandaze.

Thomas's win was a record for the Zippy Meet, and the pool where the event took place. And only five swimmers broke 16 minutes at last season's NCAA championships.

Video from the meet shows Thomas starting out a full torso length ahead of her closest competitor, and extending the lead to nearly a full lap.

She consistently finished the laps at quicker speeds than her opponents, and when she won, the scoreboard flashed her record-setting time to complete the race.

It was the third record Thomas was able to set at the Zippy Invitational over the weekend.

The first US record was broken on Friday, December 3, when Thomas won the 500-yard freestyle with a time of 4:34:06. She raced to victory 14 seconds ahead of Kalandaze - the swimmer she beat by 38 seconds on Sunday.

And then on Saturday, she won the 200-yard freestyle in 1:41:93 - seven seconds ahead of her nearest rival, giving her the fastest female US time ever for that race too.

It's the first season Thomas, who was formerly named Will, has competed in the swimming meets as a transgender woman. As Will, Thomas competed on the men's team for two full seasons.

Her success, though, has drawn criticism from some claiming she has an unfair advantage, as those who were born male tend to have longer limbs, larger hands and feet, along with greater upper-body strength.