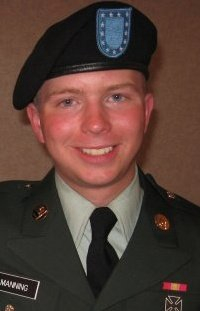 When I hear someone say that soldiers “defend our freedom,” my immediate response is to gag. I think the last time American soldiers actually fought for the freedom of Americans was probably the Revolutionary War — or maybe the War of 1812, if you want to be generous. Every war since then has been for nothing but to uphold a system of power, and to make the rich folks even richer.

But I can think of one exception.  If there’s a soldier anywhere in the world who’s fought and suffered for my freedom, it’s Pfc. Bradley Manning.

Manning is frequently portrayed, among the knuckle-draggers on right-wing message boards, as some sort of spoiled brat or ingrate, acting on an adolescent whim.  But that’s not quite what happened, according to Johann Hari (“The under-appreciated heroes of 2010,” The Independent, Dec. 24).

Manning, like many young soldiers, joined up in the naive belief that he was defending the freedom of his fellow Americans. When he got to Iraq, he found himself working under orders “to round up and hand over Iraqi civilians to America’s new Iraqi allies, who he could see were then torturing them with electrical drills and other implements.” The people he arrested, and handed over for torture, were guilty of such “crimes” as writing “scholarly critiques” of the U.S. occupation forces and its puppet government. When he expressed his moral reservations to his supervisor, Manning “was told to shut up and get back to herding up Iraqis.”

The people Manning saw tortured, by the way, were frequently the very same people who had been tortured by Saddam: Trade unionists, members of the Iraqi Freedom Congress, and other freedom-loving people who had no more use for Halliburton and Blackwater than they had for the Baath Party.

For exposing his government’s crimes against humanity, Manning has spent seven months in solitary confinement –  a torture deliberately calculated to break the human mind.

We see a lot of “serious thinkers” on the op-ed pages and talking head shows, people like David Gergen, Chris Matthews and Michael Kinsley, going on about all the stuff that Manning’s leaks have impaired the ability of “our government” to do.

He’s impaired the ability of the U.S. government to conduct diplomacy in pursuit of some fabled “national interest” that I supposedly have in common with Microsoft, Wal-Mart and Disney. He’s risked untold numbers of innocent lives, according to the very same people who have ordered the deaths of untold thousands of innocent people.  According to White House Press Secretary Robert Gibbs, Manning’s exposure of secret U.S. collusion with authoritarian governments in the Middle East, to promote policies that their peoples would find abhorrent, undermines America’s ability to promote “democracy, open government, and free and open societies.”

But I’ll tell you what Manning’s really impaired government’s ability to do.

He’s impaired the U.S. government’s ability to lie us into wars where thousands of Americans and tens of thousands of foreigners are murdered.

He’s impaired its ability to use such wars — under the guise of promoting “democracy” — to install puppet governments like the Coalition Provisional Authority, that will rubber stamp neoliberal “free trade” agreements (including harsh “intellectual property” provisions written by the proprietary content industries) and cut special deals with American crony capitalists.

He’s impaired its ability to seize good, decent people who — unlike most soldiers — really are fighting for freedom, and hand them over to thuggish governments for torture with power tools.

Let’s get something straight. Bradley Manning may be a criminal by the standards of the American state. But by all human standards of morality, the government and its functionaries that Manning exposed to the light of day are criminals. And Manning is a hero of freedom for doing it.

So if you’re one of the authoritarian state-worshipers, one of the groveling sycophants of power, who are cheering on Manning’s punishment and calling for even harsher treatment, all I can say is that you’d probably have been there at the crucifixion urging Pontius Pilate to lay the lashes on a little harder. You’d have told the Nazis where Anne Frank was hiding. You’re unworthy of the freedoms which so many heroes and martyrs  throughout history — heroes like Bradley Manning — have fought to give you.