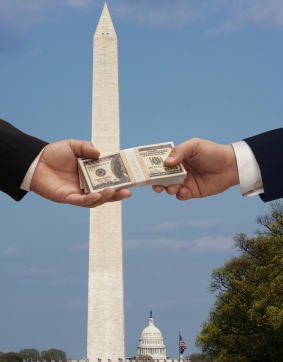 BBC News reports that Alcatel-Lucent, a global powerhouse in the telecommunications industry, “will pay $137m (£88.7m) to settle US charges that it paid bribes to win Latin American and Asian contracts.” The legal strikes were in part based on Securities and Exchange Commission claims that the company “used consultants who performed little or no legitimate work to funnel more than $8m in bribes to government officials.”

The most remarkable feature of the story is how very unremarkable it is — that a giant corporation would bribe a government is in a very real way the definition of politics. Another notable aspect of the story is its identification of structures that funnel money to the powerful through the creation of titles and jobs that actually do nothing at all; this is, of course, exactly how the corporatist economy functions, robbing labor to pour wealth into the tiny tip of the manager-class pyramid.

Stories like this one ought to appall us, to turn us against our “public officials,” but we shouldn’t compartmentalize them from the political process as a general formula. When Big Business lobbies Congress to raise competitors’ costs enough to foreclose participation, it’s fashionable to call it “interest group democracy.”

Among the things that we, as anarchists, are trying to do is sow the seeds of a society wherein the means of production are — rather than exclusively controlled by a small, idle political class — held by those who, through their labor, should own them.

I deliberately decline to perpetuate the bewildering ambiguity of the idea that we should want “private ownership of the means of production” — or “public” for that matter. As Sheldon Richman and Kevin Carson have pointed out, the purport of either of those approaches is informed by what “private” and “public” signify within our political/legal framework. This is not to suggest a top-down reorganization of society or an argument for dragooning people into accepting some arbitrarily-imposed order.

The egalitarian aspirations of the anarchist would, of themselves, be invalidated if they alone were the cynosure of our vision for society, if we didn’t also consider society’s passage from today’s violent system of theft to Paul Goodman’s “new order” of “free action.” “Equality without freedom,” taught Mikhail Bakunin, “is the despotism of the State. … [T]he most fatal combination that could possibly be formed, would be to unite socialism to absolutism.” It is the process itself, the very operation of nonviolence and trade, that will erode state-capitalism by eliminating privilege.

Libertarians who have rightly fixed themselves on the nonaggression principle as the nucleus of our social theory ought to ponder the implications of that principle; they may find it uncomfortable to learn that today’s corporations have not amassed their power or their domination of resources merely through competition, through “offering something the consumer wants.” The idiosyncratic preference for an economy commanded by oversized companies should not be enough for conscientious libertarians.

We must — at the very least — accept the possibility that the state’s impediments to voluntary relationships are both the origin of this capitalism and a handicap to “smallness” and its potential. That so many libertarians have a predilection for America’s corporate pecking order economy, and for exporting it around the world, is perhaps some attestation of the success the state and its deputies have had in fraudulently stamping their system as “the free market.”

This inclination is part of what Roderick Long calls “right-conflationism,” and its twin on the left “is the error of treating the evils of existing corporatist capitalism as though they constituted an objection to a freed market.” In A Vindication of Natural Society, Edmund Burke identified an inevitable corollary of the latter species of conflation, which mistakes today’s economy as an unbridled free market; left-conflationists, met with the evils of the supposed “free market,” turn to the state as — in Burke’s words — “Protection for the Poor and Weak,” but what could be more, as he calls it, “ridiculous?”

Voluntary relationships that don’t rely on hierarchies superimposed to profit the powerful are full of untapped potential, of sundry ways to attend to society’s problems. The state, by comparison, was never set up or set in motion to do anything but line the pockets of its patrician class. To truly discourage bribery and corruption, we need to work around the state, removing it from the equation and allowing free people to thrive.

UPDATE: Inside Twitter's Secret Files And The Attempt To Cover Up the Truth of What They've

FBI Held 'Weekly Meetings' With Big Tech Ahead of 2020 Election, -

Earth To Reporters: Why Is No One Asking SBF What Happened To The $3.3 Billion He Borrowed?