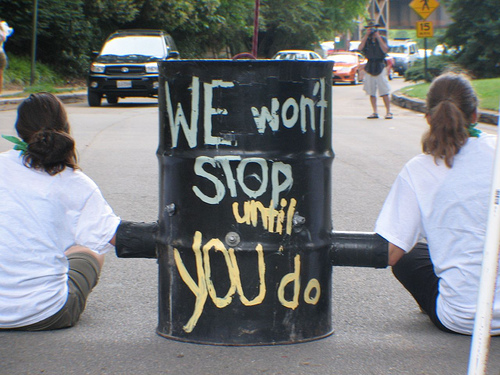 Liberal goo-goos and “good citizens” of all stripes are fond of saying that “We must continue to obey the law while we work to change it.”  Every day I become more convinced that this approach gets things precisely backwards.  Each day’s news demonstrates the futility of attempts at legislative reform, compared to direct action to make the laws unenforceable.

The principle was stated most effectively by Charles Johnson, one of the more prominent writers on the libertarian Left (“Counter-economic Optimism,” Rad Geek People’s Daily, Feb. 7, 2009):

“If you put all your hope for social change in legal reform … then … you will find yourself outmaneuvered at every turn by those who have the deepest pockets and the best media access and the tightest connections. There is no hope for turning this system against them; because, after all, the system was made for them and the system was made by them. Reformist political campaigns inevitably turn out to suck a lot of time and money into the politics—with just about none of the reform coming out on the other end.”

Far greater success can be achieved, at a tiny fraction of the cost, by “bypassing those laws and making them irrelevant to your life.”

Johnson wrote in the immediate context of copyright law.  In response to an anti-copyright blogger who closed up shop in despair over the increasingly draconian nature of copyright law, he pointed to the state’s imploding ability to enforce such laws.  The DRM of popular music and movie content is typically cracked within hours of its release, and it becomes freely available for torrent download.  Ever harsher  surveillance by ISPs in collusion with content “owners” is countered by the use of anonymizers and proxies.  And the all-pervasive “anti-songlifting” curriculum in the publik skools, in today’s youth culture, is met with the same incredulous hilarity as a showing of “Reefer Madness” to a bunch of potheads.

The weakest link in any legal regime, no matter how repressive on paper, is its enforcement.

I saw a couple of heartening news items this past week that illustrate the same principle.  First, a judge in Missoula County Montana complained that it would soon likely become almost impossible to enforce anti-marijuana laws because of the increasing difficulty of seating juries.  In a recent drug case, so many potential jurors in the voir dire process declared their unwillingness to enforce the pot laws that the prosecution chose to work out a plea deal instead.  The defendant’s attorney stated that public opinion “is not supportive of the state’s marijuana law and appeared to prevent any conviction from being obtained simply because an unbiased jury did not appear available under any circumstances …”  The same thing happened in about sixty percent of alcohol cases under Prohibition.

Public agitation against a law may be very fruitful indeed — but not so much by creating pressure to change the law as by creating a climate of public opinion such that it becomes a dead letter.

Another morale booster is the rapidly improving technology for recording cops, which Radley Balko (a journalist whose chief bailiwick is police misbehavior) describes in the January issue of Reason Magazine (“How to Record the Cops“).    Miniaturized, unobtrusive video cameras with upload capability can instantly transmit images for storage offsite or stream content directly to the Internet — which means that the all-too-frequent tendency of thuggish cops to seize or destroy cameras will result only in video of the very act of seizure or destruction itself being widely distributed on the Internet.  “Smile, Officer Friendly — you’re on Candid Camera!”

The practical implication, according to Balko, is this:

“Prior to this technology, prosecutors and the courts nearly always deferred to the police narrative. Now that narrative has to be consistent with independently recorded evidence. And as examples of police reports contradicted by video become increasingly common, a couple of things are likely to happen: Prosecutors and courts will be less inclined to uncritically accept police testimony, even in cases where there is no video, and bad cops will be deterred by the knowledge that their misconduct is apt to be recorded.”

As such technology becomes cheap and ubiquitous, police will increasingly operate in an atmosphere where such monitoring is expected — and feared — as a routine part of their job.  Even the most stupid and brutal of cops will always carry, in the backs of their minds, the significant possibility that this might be one of the times they’ve got an audience.

New technology, empowering the individual, will soon deter cops in a way that decades of civilian review boards and police commissions failed to achieve.

So the goo-goos have it backwards.  Don’t waste time trying to change the law.  Just disobey it.
------------------
C4SS Research Associate Kevin Carson is a contemporary mutualist author and individualist anarchist whose written work includes Studies in Mutualist Political Economy, Organization Theory: An Individualist Anarchist Perspective, and The Homebrew Industrial Revolution: A Low-Overhead Manifesto, all of which are freely available online. Carson has also written for such print publications as The Freeman: Ideas on Liberty and a variety of internet-based journals and blogs, including Just Things, The Art of the Possible, the P2P Foundation and his own Mutualist Blog.