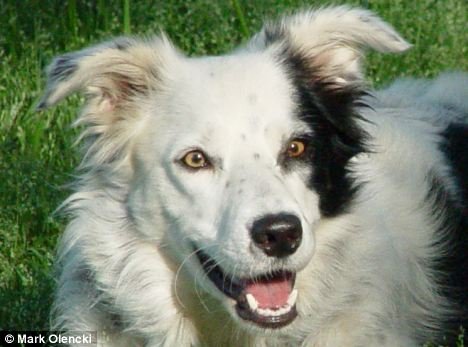 Bet your Christmas puppy won’t be able to do this. Actually, you’d better hope it can’t, because your dog-toy needs might break the bank.

A border collie named Chaser has learned the names of 1,022 individual items — more than any other animal, even the legendary Alex the parrot.

Psychologists Alliston Reid and John Pilley of Wofford College in Spartanburg, S.C., wanted to test if there was a limit to the amount of words a border collie could learn, so they taught Chaser the names of 1,022 toys, one by one, for three years. New Scientist reports that they got her to fetch the toy and then they repeated the name to reinforce her understanding.

They regularly tested her on her vocabulary by putting random groups of 20 toys in another room and having her fetch them by name. Chaser, now 6, never got less than 18 out of 20 right, in 838 (!) separate tests over three years.

It takes 16 plastic tubs to hold all the toys.

Mine. All Mine: Chaser the border collie's head can be seen at the top of her mountain of toys. She can identify each toy — all 1,022 of them — by name.  Journal of Behavioural Processes

Watch Pilley give Chaser some impressively complex commands — combining three verbs with three nouns — in the video below. She understands the verbs “nose,” “get” and “paw.” Her reward is playtime with “Blue,” a little ball she chases across the room. For a whole collection of Chaser videos, click here.

She learned common nouns that represented categories, such as “ball,” and she learned to infer the names of objects by their association with other objects.

Rico the border collie, from the Max Planck Institute in Leipzig, Germany, was previously top dog — he had a vocabulary of about 200 words. Chaser’s feats are chronicled in the journal Behavioural Processes.

1 Comments in Response to Video: Smartest Dog Ever Can Pick Out 1,022 Toys By Name

Yeah well old Neddy has them beat for the stupidest dogs ever and they walk on  2 feet and their names are Editor and Publisher of Freedoms Phoenix and let me tell you why they are so dumb.

Because they throw people out and seek to be supreme over their little corner of the universe and they pretend to care about people but they really don't. What they care about is being celebrities and getting $1k and above speaking engements.

When a bro goes down into trouble, you should see them run like a bunch of pack rats.

John Chester Stuart deserves a fail trial but he ain't getting one.