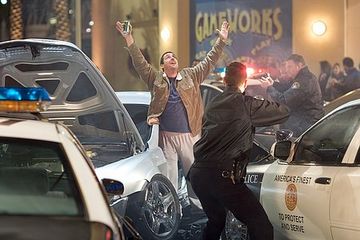 “The right of the people to be secure in their persons, houses, papers, and effects, against unreasonable searches and seizures, shall not be violated, and no Warrants shall issue, but upon probable cause, supported by Oath or affirmation, and particularly describing the place to be searched, and the persons or things to be seized.”

I really am coming to the conclusion that the States and M.A.D.D.(Mothers Against Drunk Driving) have taken the issue to use drunk driving too far as a way for the state to raise revenue or to take away our God given rights. This nationwide “No  Refusal” blood test violates the fourth amendment of the bill of rights because people should enjoy the right to be secure in their persons from unreasonable searches and seizures. That means “hands off my blood”

The no refusal weekend is funded by Federal Grant money from the National Highway Transportation Safety Board to fund no refusal weekends. Even the Austin Police gets federal Grant Money for taking blood on the side of the road with rubber stamp warrants from a judge who stay up all night who just sign a warrant without seeing the accused.

The issue of drunk driving is chasing away business from downtown night clubs and bars from what little patronage they can get in this stagnant economy. I hear from countless people who used to have a beer and drink after work now stay away from many downtown areas because the police have become a predatory force preying on anyone for revenue.

The issue of Drunk Driving is went way too far. Carrie Lightner left her own organization she founded called Mother Against Drunk Driving because the direction the organization it was taking she wanted no part of. I have a problem with “No refusal Weekends”because in Houston Texas is a sanctuary city. How many drunk illegal aliens who are above the legal limit will be allowed to  pass through the checkpoints without taking a blood test. If any illegal alien is jabbed with a needle. We will hear cries from the Mexican government for racism.Yes Texas has a high rate of Alcoholic related traffic fatalities. I wonder how many of the percentage is illegal aliens compared to American Citizens.

I think it is time we throw the book at the system. If anyone is accused of driving drunk and the person knows they are not impaired. Exercise the right to a trial by jury and not be at the mercy of a judge who has a business on the side running a Drug and Alcohol School were he sends people to as a punishment. It think it is time to expose the DUI/DWI scam to a jury of our peers. If they just use a video tape. It will be really obvious the state does not meet the burden of proof. I think it is time to use the jury box as a veto against Law Enforcement and the system using an emotional issue of Drunk Driving to squeeze revenue out of the people.

I do not trust these crime labs either. If any of you think all crime labs are like the C.S.I. TV Show. I have ocean front property in Round Rock Texas I want to sell you.Crime labs in Texas have been known to botch evidence to get a guilty conviction and the chain of evidence I find highly questionable with handling blood samples.

If they were really serious about stopping drunk drivers. The National Highway Transportation Safety Board would work with Immigration and Customs Enforcement start deporting illegal alien Drunk Drivers. We hear nothing on this concern. I say tonight this News Years Eve. Stay home or if at party.Sleep over or have a place to stay close by. Take a cab or have a designated driver if you decide to go out. Lets make all Drunk Driving stops be all Illegal Aliens. Maybe the police will wake and see the scam and see they are not allowed to jab them with a needle but have to take ours.

These no refusal blood test need to be challenged. The burden of proof lies with the state to justify probable cause if you are drunk or not. Just because they refuse a breathalyzer test because the calibration is out of whack to make everyone guilty will now force us to have our blood drawn without a warrant not knowing the chain of evidence were the risk of being tampered. Just remember to repeat and say to the officer if they do take your blood for no reason”I do not consent”. We must not allow the system to use Drunk Driving as a way to take our liberties and rights away.

Part #1-4: Privacy Basic Training: What is the Threat Model?