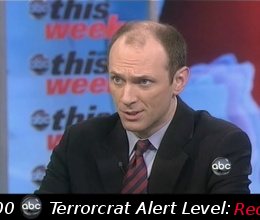 President Barack Obama's chief economic adviser warned Sunday that "the impact on the economy would be catastrophic" if Congress fails to raise the debt ceiling.

"This is not a game," Austan Goolsbee, chairman of the White House Council of Economic Advisers, said. "You know, the debt ceiling is not something to toy with."

The government could default on its obligations if it hits the current $14.3 trillion limit on borrowing. Some Republicans are expected to hold the debt ceiling hostage in exchange for tough spending cuts.

"If we hit the debt ceiling, that's essentially defaulting on our obligations, which is totally unprecedented in American history," Goolsbee predicted. "The impact on the economy would be catastrophic. That would be a worse financial economic crisis than anything we saw in 2008."

"As I say that's not a game. I don't see why anybody's talking about playing chicken with the debt ceiling. If we get to the point where you've damaged the full faith and credit of the United States, that would be the first default in history caused purely by insanity."

"There would be no reason for us to default other than that would be some kind of game. We shouldn't even be discussing that. People will get the wrong idea. The United States is not in danger of default," he added.