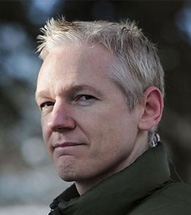 Fearing that Wikileaks could publish secrets that will damage its reputation, top Bank of America officials are internally investigating what information Wikileaks may possess, as the company's chief executive officer closely monitors the situation.

Bank of America stock fell 3 percent that day, as wire services and the business press picked up on the report that the corporation was the apparent target of Wikileaks chief Julian Assange's threat to "take down" a major US bank early in 2011.
Read Full Story