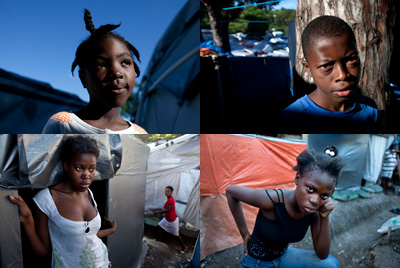 "We had this rape problem before the earthquake," Yolande Bazelais tells me. She is the president of FAVILEK (the Creole acronym stands for Women Victims Get Up Stand Up), an organization founded by women who were raped (PDF) during the 1991 coup that ousted President Jean-Bertrand Aristide. We're sitting under a blue tarp in the driveway of another NGO's office, because FAVILEK doesn't have one, with four of the other founders and my translator, Marc. He works with FAVILEK sometimes, running rape-related errands, taking victims like Alina to the hospital or the Institute for Justice and Democracy in Haiti (IJDH), an international lawyers' group, for legal support. "Now," Bazelais says, "we have double problems."

It's a terrifying statement, considering that a survey taken before the earthquake estimated that there were more than 50 rapes a day just in Port-au-Prince, based on just the reported rapes—and more than half of the victims were minors. That's how it's been for as long as anyone can remember, with the perpetrators ranging from neighbors to street thugs to, as the FAVILEK founders can attest, police and paramilitaries who use rape as a tool of intimidation and terror.

But nearly a year after the 7.0 earthquake that shook some 280,000 buildings to the ground and killed or maimed nearly twice that many people, FAVILEK's insufficient resources are stretched thinner than ever. The organization says that displacement camps are hornet's nests of sexual violence.

How to Live in an RV on Your Own Land

Letters to the Editor • Property Rights

New insight on Klaus Schwab's 'You will own nothing and be happy':

BOMBSHELL: Eva Vlaardingerbroek Exposes How Bill Gates May Be Connected to Taking the Farmers Land

What Will Happen to Personal Property in America?