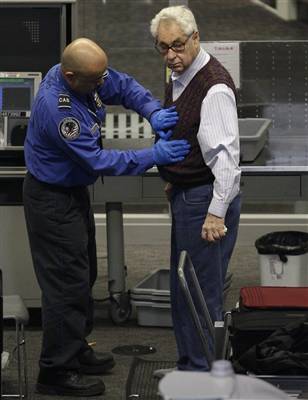 A new year has brought new resolve for airport managers who are fed up with the Transportation Security Agency.

"The TSA has grown too big and we're unhappy with the way it's doing things," said Larry Dale, president of Orlando Sanford International Airport. "My board is sold on the fact that the free enterprise system works well and that we should go with a private company we can hold directly accountable for security and customer satisfaction."

Full-body scanners and enhanced pat-downs have spurred a loud outcry from an angry public, as well as some big hitters on Capitol Hill, and airports are looking at moving away from federal TSA workers and moving toward private contractors.

Same cost, same procedures This despite the fact that opt-out airports realize no cost savings. "TSA issues the RFP [request for proposal] and selects and manages the contractor" that steps in, said Michael McCarron, director of community affairs at San Francisco International, one of the first airports to adopt private screeners.

Vote: Who should conduct airport pat-downs?

Nor will passengers at opt-out airports be able to sidestep security procedures. "TSA sets the security standards that must be followed and that includes the use of enhanced pat-downs and imaging technology, if installed at the airport," said TSA spokesperson Greg Soule.

But airports studying the program believe there may be benefits worth pursuing.

"We aim to ensure that the highest level of security is balanced by the most passenger-friendly service possible," said Nancy Suey Castle, a spokesperson for Los Angeles World Airports. "Contracting private screeners could be a method to achieve this goal."

Timeline: Top travel stories of 2010 (on this page)

"We’re very good at what we do," said Gerald Berry, president of Covenant Aviation Security, the private screening company hired by TSA for San Francisco International, Sioux Falls Regional and several Montana airports. "By law, our screeners have to get the same pay and benefits as government screeners and we have to do an equal or better job."

Opting out When TSA was created in 2001, the Aviation and Transportation Security Act mandated that the Screening Partner Program (SPP) be adopted to allow screening by private companies under federal oversight.

Airport officials say most travelers don't know if the screeners performing pat-down checks work for the TSA or a private company. So far, no airport that joined SPP has opted back into the federal screening program.

Unlike government workers, problem employees working for contract screening companies "can be removed immediately." noted Mark VanLoh, director of aviation at Kansas City Aviation Department. The private screening company is easier to reach, he added. "Because I am a client, I usually get a return call immediately. We are all in the customer service business, so that's a nice thing to have."

Focusing on security The bottom line, said McCarron of San Francisco International, is that "we feel our passengers are as safe as at any other airport. And by allowing [the private screening company] to handle the personnel management of the screening process, the TSA staff at SFO can focus its attention on security issues."

"It's up to the individual airports to determine whether or not participation is in their best interest," said Christopher Bidwell, vice president of security and facilitation for the Airports Council International-North America, a group that represents governing bodies that own and operate commercial airports.

Two reports — completed in 2004 and 2006 — show "there were some efficiencies under the private model," Bidwell said, but "it would be helpful to have another study to shed new light."

The board of Minneapolis-St. Paul International discussed privatizing security to help meet its goal of keeping security wait times to 15 minutes or less, said Patrick Hogan, director of public affairs. "A private firm would still have to follow all TSA regulations and procedures, so it's really just a matter of whether they could do the job more efficiently, streamlining the process. At this point, we don't have a clear sense of whether that would be the case," he said.

"Contracting with private screening companies offers staffing flexibility and a few other advantages," said Robert Poole, director of transportation policy for the Reason Foundation, a free market think tank, "but the system is still very centralized and run too much by TSA."

"Regardless of who’s performing security, they’re working with a government process that is generally outdated and less efficient," said Steve Lott of International Air Transport Association (IATA), a group that represents the airline industry. IATA recently unveiled a proposal for a redesigned "security checkpoint of the future" that uses biometric data to speed travelers through the airport experience. "We need to think a little more long term here," Lott said.

Last month, in an appearance on CNN’s State of the Union, Homeland Security Secretary Janet Napolitano said current security measures are "objectively safer" for airline passengers and will continue to be part of the airport experience for "the foreseeable future."

Rep. John Mica, meanwhile, will likely continue pressing for TSA reform while continuing to urge airports to opt out of the federal screening program.

A chance to reflect But real change, noted the Reason Foundation's Poole, could come from the Congress. "[2011] is the 10th anniversary of both the 9/11 attacks and the TSA. There's a good chance we’ll have TSA reauthorization that will provide the opportunity to take a look at how TSA is working."

Dale of Orlando's Sanford Airport, meanwhile, expects to have private screeners on duty in less than a year. "I've talked with John Mica, who is the congressman for our district, and we expect things to move along in an orderly fashion."

That timeframe may prove to be unrealistic.

Interactive: The TSA pat downs explained by cartoons (on this page)

Cindi Martin, airport director at Glacier Park International in Montana, said her airport sent an SPP application in October of 2009. They, along with three other Montana airports, are still waiting for action.

The delay is creating a new set of problems. Knowing that a private contractor will eventually take over, "[Transportation Security Officers] are retaliating against authority and the airport management staff," Martin said, "and we’re getting no help from TSA management."